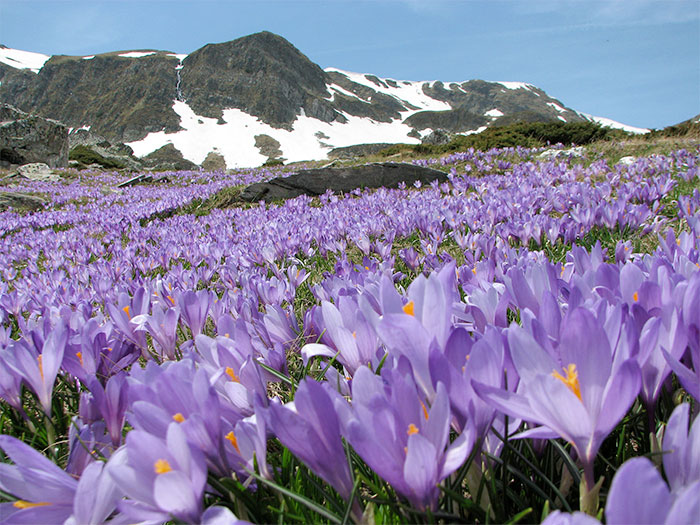 What is saffron?
Saffron, the word immediately reminds you of oriental colours, perfumes and treasures. In other words, it’s nice, tasty and expensive; its nickname is Red gold. So, we are dealing with luxury products! But this is exaggerated, since it can also be conspicuous and useless, which is undoubtedly is not the case of saffron. Saffron is simply a very beautiful flower (Crocus Sativus), a delicate and appreciated spice with very interesting medical properties.

Only Crocus Sativus provides saffron
Saffron-sativa-Linnaeus, which belongs to the Irid family. It is a cultivated plant, often confused with Colchicum. The name of the saffron comes from the Arabic-Persian zafarfar herb; the Arabs have long dominated the spice market.
It is a corm that is planted at a depth of 15 cm and multiplied each year to produce new corals.
Crocus sativus has a reverse vegetation cycle, which means that the leaves come in September and the flowers of the plant are dried in October in the following May.
The saffron flower consists of 6 lilac petals, 3 yellow leaves and a red stamp.
It is this famous pestle made of 3 stigmas (filaments) which when dried gives the spice saffron

Where does saffron come from?
It is believed that this mysterious plant comes from Kashmir and was introduced by the Phoenicians to Gaulle and later by the cruisers on their way back from Palestine. Doctors of the pharaohs prescribed it for stomach ache. The history of saffron goes back, since it was already been used in Ancient Greece as a dye

Saffron, golden spices for cooking
Yes, you can also eat this is not new, since it was already used in the kitchen under the rule of King Solomon.
Saffron is a spice and is used in the kitchen for its taste, as well as the golden yellow colour, which gives the dishes.
It is well-known and appreciated with fish such as Paella, Bouillabaisse, but also in tajines, Italian risotto…
It is also found in pudding such as saffron pudding, in particular

Saffron as a witch cream
When saffron is being used to make syrup which can be used to make original cocktails like Kirs, Punchs … and an excellent topping to make desserts like rum slurps.

Saffron, a drug?
And it is also a cure! This is known for a long time, as Hippocrates recommended it to digestive disorders and toothache. To the east is to bring wisdom and joy, long used to treat hysteria associated with opium. Good for the blood circulation, relieves menstrual cramps and apparently an aphrodisiac for women. Today, Crocus Sativus is still prescribed in homeopathy for women’s blood circulation problems.

Saffron, a strong colouring agent
It has long been used as a food dyestuff in the manufacture of sweets and desserts.
As a colorant, saffron gives a luminous golden colour. Only one saffron unit is sufficient to colour 100,000 units of water.
During the middle Ages, the monks used glue that was dyed on protein with saffron to illuminate manuscripts.
During antiquity, the Greeks and the Chinese held the colour for the kingship.
It is also the saffron, which is responsible for the wonderful golden colour of the Chartreuse, a fine liqueur.

Great benefit of Saffron!
Saffron contain great amount of Manganese which help to regulate the body sugar, metabolism and absorb calcium. It also contains 38% of Iron which cleans the blood. There are great amount of vitamin C that prevent infection. Potassium in the saffron assist with balancing the fluids contained in the cells of the body.
Try our Fresh Saffron to gain from the great nutrient benefit of Saffron

The cultivation of saffron
Saffron has grown slightly, in several places around France. Cultivation is relatively easy, you just have to get some corms, plant and red gold.
This could leave an idyllic and caricature impression and is not really far from the truth, but the real difficulty is the intense work needed to reap the plant that makes it so expensive
You really have to collect about 150,000 saffron blossoms to harvest a kilo of stigmas and about 5 kilos of stigmas to make a kilo of dry saffron usable as a spice.